The Beauty of Fear to Spark Your Imagination

Fear gets a bad rap.  Most of us, when faced with something that sends our heart racing, think “Oh, calm down, don’t be afraid!” But fear in fact is one of the most powerful catalysts that we have. Why? Because it sparks our imagination. Fear forces us to pretend. We imagine our way out of a disaster. Heading for disaster is something we do every day and it does bring out the best in us. We all get to write our own scripts – we all star in, direct and write our own lives, sort of like a movie. Sometimes it’s a scary movie, sometimes a romantic comedy or a docudrama, but it is all our own creation. And every frame of this film sends chemistry into our body – cortisol when we are scared, and oxytocin and serotonin when we creatively triumph.

Imagination fuels everything. Einstein, according to some, wasn’t necessarily the greatest genius. There was another scientist, Henri Poincare, who at the time had equal if not higher computational brainpower. But what made Einstein unique was he took command of his imagination early on and conducted thought experiments – what if I could run as fast as the speed of light? These thought experiments led him to make new connections between existing things. And if Einstein can do it, so can we! Let’s connect fantasy and reality.

Many people think about me as an illustrator, but I wasn’t a trained artist, I just saw someone draw a picture in a meeting and suddenly I realized that if I created an image with my imagination and also drew it into a picture, it could potentially create an outcome. I began to experiment and see if I could literally draw my future into existence. What I found was my imagination was like a superpower that could help me change anything. I sometimes didn’t know which idea was going to happen, but the more freedom I gave myself to dream and draw, the more realities I began to experience. Through playing it out whether in your mind, or in real life, I have found that anyone can transform their world.

Here is the thought experiment I have been running with people around the world for the past 30 years. When you are facing fear or challenge or discomfort, if you imagine how it is on the other side of that hell, in the new reality you want to have and you draw it in a picture or write out the qualities and characteristics you will be experiencing there, it will come to be. You simply need to pretend you’ve already made it. Like a child, enter into the new world and imagine it with all of your heart. Play freely there. Don’t worry about how you will get there; life will fill in the blanks. This will become your reality. You may be surprised by which piece of your dream becomes your new life. But it will be the piece that is right for you.

Imagination is the one tool we universally share as a species – daydreaming is our common language. Life is so complicated; it asks us at every turn to shape shift. That’s the bad news. The good news is that our innate nature is to play, to imagine.

A great imagination is required of anyone who struggles with adversity, and who of us doesn’t? If everything were perfect, you wouldn’t need your imagination. We are overqualified to live an easy, perfect life.

Whether you are facing crisis, turmoil or that next big disaster, trust yourself. You are designed to change the script for every predicament; you just need to let your imagination take it from here.

Patti Dobrowolski is the CEO of Up Your Creative Genius, live illustrator, author, visual thinker, change activator, educator, keynote speaker, performer, and the producer and host of the Up Your Creative Genius podcast, who is obsessed with showing people how to make change more easily. A 4x TEDx speaker, her TEDx talk “Draw Your Future” has been viewed over 6 million times 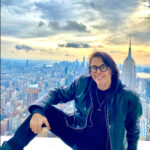 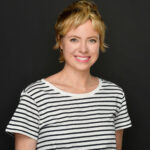