On Friday, May 27th, the day John Lennon’s Imagine was recorded in 10 takes with the final attempt becoming the master, IMAGINE proudly unveils ‘Imaginal Imaginings of Saint Disruption’ by Jeff Firewalker Schmitt.

I KNOW WAY TO MUCH OF MARIPOSA’S DARK HISTORY. Yet, the ragged meadow where I stand is beautiful only because she is present. One lone butterfly. As a child she was a terrible glutton. Endless consumption bloated her slow-moving body. She, now paralyzed by voracious unrequited hungers, enters her formative days – these were a terrible mess as well. Confined in a self-made prison, everything fell to pieces, self-destruction seemed the operative. Swirling movement and decay, it was a warzone in there. Amid this sea of muck and death, there was something in her that remained tranquil. This part of her survived many attacks. Keepers of tranquility don’t fare well in war zones. She was strong and that helped. This seed of tranquility was also crafty, it knew how to use the chaos and surrounding muck as fuel. Despite the impenetrable darkness, the seed became stronger and saw it wasn’t alone. Over time these parts banded together and achieved critical mass. In so doing, they affirmed a collective vision for a future – a truly beautiful future, as if they began to decipher a code hidden deep inside themselves. They began to multiply. Something miraculous began to happen. It would have seemed spontaneous if it weren’t for the omnipresence of ancient formless memory. These seeds became different parts of a new living being. Decay was the compost. The prison walls couldn’t keep her confined. She is (and inside always was) a butterfly.

This tale is not so much an analogy as it is a reminder that patterns of behavior repeat themselves at different scales and dimensions. Upon this spectacular interconnected living earth, this is the dance of becoming. This knowing can be a soothing balm when we soberly look at the too often horrific specter of human behavior.

I see my friend-collaborator-spiritual-siblings as a critical mass of imaginal cells in a muck-filled swarm of planetary transformation. We make poetry and music, we are Saint Disruption. We know the chrysalis is at once a prison and a womb. To witness the destruction, muck, death breaks our hearts. And it is in this broken heartedness that together strength is found. We stand among many uniting imaginal cells positioned as if by Spirit around the globe. We are this great earth’s poets, musicians, courageous truth tellers, we are those holding the ancient wisdoms of our people. We dare to speak in a way that would do great honor to our ancestors. Our hands are in the soil once again, minds humble, and one feels the gravity of our compassionate accountability. As an artistic musical family, we made the daring choice to hold a sacred mirror to a masterpiece – John Lennon’s Imagine – Mr. Lennon calls for us to shed the fear, shed the indoctrination and greed and be, truly, imaginal.

Re-creating this song, taught us a great deal. Speaking personally, I more deeply understand that creative adventures are informed by a mysterious, ancient ‘DNA.’ Kandinsky knew this. Chagall knew this. Medicine is this living restorative intelligence of the universe, the light in the center of the imaginal cell. If we have done our job right, this light lives deep between the sounds we make, between the words spoken. No external agency required for the metamorphosis. The Godhead-Dios-Sophia, she is here inside. Sovereign cells, each of us make the journey-to-the-one and soften the paradox of being. Upanishads: the goal of conscious evolution is the annihilation of time. The chaos and destruction all around is a signpost of emergence, a temporary state as the old guard desperately clings to maintain the stronghold. This is creative fuel. Hold up the mirror. Look to yourself and call-in those courageous enough to remain tranquil. Be the medicine. Make beauty.

Saint Disruption is a musical collaborative founded by Jeff Firewalker Schmitt and John Medeski (Medeski Martin & Wood) that brings together musicians, video artists, and visionaries to explore the issues of our time, and whose soulful rendition of John Lennon’s Imagine was released on the heels of their debut album, Rose in the Oblivion. 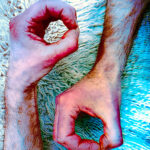 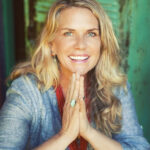