A Tribute to R. Murray Schafer & his Imagination

Today on the annual World Listening Day (July 18), started in 2010 by the World Listening Project in honor of the birthday of Raymond Murray Schafer (18 July 1933 – 14 August 2021), a Canadian composer, writer, music educator, and environmentalist best known for his World Soundscape Project and his book The Soundscape (1977), IMAGINE proudly presents an exclusive tribute to him by his brother, D. Paul Schafer.

Murray was my older and only brother. He passed away on August 14, 2021, after a long battle with Alzheimer’s. Soon after he passed away, tributes began to pour in from all over the world.

Murray is well known in musical, acoustical, and environmental circles throughout the world for his seminal contributions as a distinguished composer of works for orchestras, chamber groups, choirs, soloists, and others; the nature, meaning, and exploration of sounds, the concept of the soundscape, global soundscape research, founder of the new discipline of acoustic ecology; highly inventive approaches to music education as a composer; and the creator of a remarkable music-theatre cycle over more than forty years called Patria (homeland). This twelve-part cycle consists of  Prologue: The Princess of the Stars, Wolfman, Requiems for the Party Girl, The Greatest Show, The Black Theatre of Hermes Trismegistos, The Crown of Ariadne, RA, Asterion, The Palace of the Cinnabar Phoenix, The Enchanted Forest, The Spirit Garden, and  Epilogue: And Wolf Shall Inherit the Moon. Half of these works are performed outdoors on or around lakes, in the middle of dense forests, and other natural settings far away from towns and cities, rather than indoors in traditional theatre spaces, auditoriums, or concert halls. Music for Wilderness Lake for twelve trombones in 1979 was Murray’s first of many works for performance in natural environment settings.

For his lifetime achievements in these areas, and many others, Murray was awarded the Jules Léger Prize in 1978, the Glenn Gould Prize in 1987, the Walter Carson Prize by the Canada Council of the Arts in 2005, the Governor General’s Performing Award for Lifetime Achievement in 2009, and the Companion of the Order of Canada in 2017, one of Canada’s highest and most distinctive honours.

Although Murray lost an eye to glaucoma when he was very young, he was a very talented visual artist as well as an outstanding composer and could have had a professional career in the visual arts, as manifested in many of his musical scores, especially his Patria scores. Moreover, he was a very gifted and prolific author with numerous articles and many books to his credit, most notably The Tuning of the World published originally in 1977 and republished in 1994 as The Soundscape: Our Sonic Environment and The Tuning of the World (which is concerned with the state of the world’s soundscape and the need to re-orchestrate it in the future); Creative Music Education: A Handbook for the Modern Music Teacher, 1976; Voices of Tyranny, Temples of Silence, 1993; Patria: The Complete Cycle, 2002; My Life on Earth and Elsewhere, 2012; and many others.

In addition to his musical and visual arts talents, Murray was an exceptional organizer and animator of people and huge musical events which were imperative for most of his music-theatre works. For example, his production of RA in 1983, which took place at the Ontario Science Centre in Toronto, was more than twelve hours long and started at dusk outside the Centre where various rituals were learned, then moved participants inside from one musical site to another as well as a large hall where a delicious Egyptian banquet was served at 2 o’clock in the morning, and finally ended up outside the Centre again at dawn just as the sun was rising.

In 2000, Murray organized the highly successful event for the city of Sćlestat, France called Two Thousand Sounds for the Year 2000, and in 2003, his Coimbra Vibra in Portugal involved taking groups of twenty-five people on sound walks through this historic city. They enjoyed many musical experiences provided by children, young people, people from many different trades, and local musicians. Regarding the candle-lit finale in the city’s central square slightly after 11 o’clock at night with a large chorus singing a quiet anthem, Murray wrote, “I have witnessed many civic celebrations in different countries.  Most of them are dominated by loud music and end in a drunken brawl.  Coimbra Vibra was something different.  It involved one thousand performers and was attended by an audience of five thousand and it ended quietly!  It was one of the most memorable events of my life.”

While Murray has been called “Canada’s Wagner” for the huge music-theatre works he created and produced, unfortunately he did not have a benevolent patron like King Ludwig II of Bavaria who funded performances of many of Richard Wagner’s greatest operas in venues like the one at Neuschwanstein Castle in Germany. This was Murray’s greatest disappointment in life since he was only able to see these works performed once or perhaps twice, subsidizing them not only with ticket sales, fund raising, and a few small grants from arts councils, but also often out of his own finances and donations from some of his closest friends.

Despite this, I think it is only a matter of time before Canada’s and the world’s larger and more financially viable arts organizations decide to perform these works. When this occurs, I think Murray will go down in the pantheon of great composers as one of their most creative and innovative colleagues.

R. Murray Schafer was a Canadian composer, writer, graphic artist, music educator, and environmentalist perhaps best known for his World Soundscape Project, concern for acoustic ecology, and his pioneering book The Soundscape: Our Sonic Environment and the Tuning of the World (1977).  Schafer’s music education theories are followed around the world. He started soundscape studies at Simon Fraser University in the 1960s. In addition to the numerous awards and honors mentioned above, Schafer has won two JUNO Awards for Classical Composition of the Year: in 2004 for his “String Quartet No. 8,” and in 2011 for his “Duo for Violin and Piano.” In 2005 he was keynote speaker at the 12th International Congress on Sound and Vibration, his presentation entitled “I have never seen a sound.”  In 2013, when he was made a Companion of the Order of Canada it was “for his contributions as an internationally renowned composer of contemporary music, and for his groundbreaking work in acoustic ecology”.

Video: LISTEN! produced by National Film Board of Canada:
https://www.youtube.com/watch?v=rOlxuXHWfHw

Bing, Bang, Boom. Video made by Joan Henson and the National Film Board of
Canada in 1969 showing Murray working with a class of elementary school
students in Toronto: https://www.nfb.ca/film/bing_bang_boom 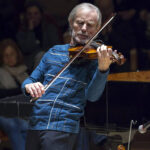