A Tribute to a Futurist, Eco-Pioneer, and San Franciscan Par Excellence

Early in the morning of Thursday, April 28, 2022, beloved visionary, beneficent bodhisattva and San Franciscan par excellence Michael Gosney left his body for what he always referred to as the “Backplane.”

The word “visionary” gets bandied about the Bay Area more than in most places, referring mostly to tech titans, but Michael Gosney—or “Goz,” as he was affectionately known to his friends—was a huge part of the city’s proud history of true visionaries.

Goz came from a long tradition of San Franciscans who were passionate about giving humanity an upgrade, about seeing and showing what was possible on Planet Earth, and who were not afraid to speak up for the softer things: peace and love, as well as a healthy dose of plant medicine and psychedelics, music, technology, and ecology, all mixed together into something quite specific to our 49 square miles surrounded by reality.

He channeled and integrated the city’s unique qualities, often combining profound humanism with a technocratic approach into what solutions could scale and change the world. Indeed, Timothy Leary once described Goz as “one of the few great pioneer humanists in the digital world.”

Michael Gosney was born July 11, 1953, in Pittsburgh, Pa., migrating to California after graduating from the University of Kansas in 1976. Early on, he became a pioneer in the brand-new field of desktop publishing. In the 1980s, he founded Avant Books and then, in 1986, the pivotal and innovative Verbum magazine that championed computer art and interactivity. Published entirely by desktop, it was the first of its kind and a major innovation at the time. Goz saw, and foresaw, the coterminous explosion of the human mind with the computer revolution and then the internet.

He also created one of the first multimedia CD-ROMs and interactive book/CD-ROM packages. This creative flow birthed the Digital-Be-In, an annual series of events that was a pivotal meeting point for the psychedelic culture and creative technology industries, described by Soledad O’Brien on MSNBC as, “where ’60s counterculture meets ’90s cyberculture.” It was based on the original Human Be-In from 1967—an event whose 50th anniversary Goz also produced, maintaining close friendships with all the surviving cast members of that time.

The organizer of the long-running How Weird Street Faire, he was of course a great DJ, too. It is fair to say that Goz brought trance and a new level of modern sound to Burning Man, leading a huge contingent of Burners into this new realm. In this and so many other ways, even pushing 70, he was “forever young.”

Goz also saw the future of cannabis and how sophisticated the audience for it was going to be. In 2011 and 2012, he produced the Deep Green Festival at Richmond’s Craneway Pavilion, which fused a cannabis conference and business expo with the electronic dance music culture to great effect. This led to the Emerald Cup and so much of the cannabis culture we have now.

Goz deeply believed in cities and the “Small is Beautiful” aesthetic. He famously wrote a detailed letter to futurist and inventor Buckminster Fuller, and received back hearty support from his hero. He served on the board of Paolo Soleri’s eco-city project Arcosanti since 1995, and hosted the seminal Paradox Conferences there.

In all of this swirl was Goz the eco-pioneer, and his theories involved leveraging deep ecology and his knowledge of and love for green cities. He founded the Green Century Institute, an inspired salon where for many years people would gather to debate environmental solutions on the city level, hosting many events at the famous building at 3220 Sacramento St.

For more than 20 years, Goz also hosted—in classic San Francisco tradition—the Goz Salon at his home. If you were lucky enough to get invited, it was like walking into a time machine, where the ghosts of electricity howled in the brains of the last great San Francisco hippies.

Many were the evenings where he and I would delve into his sophisticated theory of a magical place known as the Backplane, a noosphere-like repository of all ideas that we could commune with and take refuge in. To Goz, there was life as we knew it, and then there was the place where all life comes from and returns back to. Whatever wasn’t obvious to the naked eye, whatever was the source of it all, where the subconscious unconscious was real—that was the Backplane.

Goz was that rare combination of brilliant thinker who was at the same time super hands-on. His was a long and storied career at that liminal intersection of theory and practice. This made him the opposite of the classic, narcissistic Silicon Valley guru. He never hit it big or got rich. He would often not care about the money. He just cared that the solutions were happening, and would be exuberant about everyone else’s success. He was the Ubiquitous Connector at all the parties and networking events, selflessly introducing interesting people to each other.

Within his many projects was always the same Goz, the integrator of the elements that have made the place we call home key to solving the world’s problems. Find him and you would find the beating heart of San Francisco’s cyber-psychedelic culture, faith in the transformative power of new technology and the value of basing the world we want on a holistic foundation of spiritual ecology—and braiding them altogether was Goz himself, effortlessly connecting countless individuals and initiatives for the betterment of all. Even though the list of various things he did seems ultra-diverse, to those of us who knew him it was all One Thing.

His friends, and there were many, will never forget his hospitality, generosity of spirit and his never-ending search for synergy through connecting like-minded human beings.

We in the Transformational Social Change Community say goodbye to a rare friend who was always there with love and wisdom, kindness and curiosity. Now on his final “Big Trip” we wish him a fantastic journey into the Great Mystery. Hopefully, he knows how loved he was.

IMAGINE Vol. 2 is dedicated to the memory of Michael Gosney, who was expecting to be a contributor to this issue before he unfortunately passed away. IMAGINE and so many in our community were very impressed and inspired by Michael, who in every way embodied what it means to live with imagination. Deeply saddened by his passing, we were continually wowed by his creativity, grateful for his friendship and generosity, and are now honored to present this beautiful tribute to him by Lawrence Axil Comras, originally published in the San Francisco Standard.

Please also visit CelebratingMichael.net, a website dedicated to the Michael Gosney tribute event that chronicles the many remembrances and performances held in his honor. 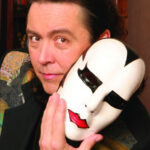